Confession Number 108: I Love the Holidays

I *love* bank holidays!  I know they must be a pain in the rear for some of you, but the somewhat random quality time with my man is sure fun!  Since being with Dustin I've learned to appreciate my President's more, heck, I'll even celebrate Columbus with vigor.  This week we loved celebrating MLK Jr. Day together.  Since KJ was also out of school it was a great excuse for us to spend some amazing family time together.

Monday morning we jumped in the car and headed to Tulsa.  I had an appointment with the amazing Dr. Dietz to check on Baby Brother 2.0, so we stopped there first.  Since both kids in a small exam room wasn't his idea of fun, Dustin waited in the car with the crazies and let them watch a movie while I ran in for my quick appointment.  Baby Brother 2.0 looked great and we are excited to head back in a couple of weeks to see him on the big screen of the "good" ultrasound room. Baby Brother 2.0 at 21 weeks
The pregnancy seems to be going well.  I seem to be getting bigger and bigger everyday.  He's becoming more active.  Why is it they practice their acrobatics at night???  The Braxton Hicks have started, much to my dismay.  They are no worry, just make Mommy a little uncomfortable.  Just hoping they stay random!
After our appointment, we headed to try a new lunch place for us.  On the drive down I bought a Groupon for The Gnarley Dawg.  It is a hot dog place on Mingo.  Really a cool, family friendly place.  The kids got plain dogs.  I had a regular o' (delicious) chili cheese coney and Dustin ventured out to try a couple of their signature dogs.  He even had one with mac and cheese on top!  We loved it and will surely be returning!  I love being able to hear about new places on Groupon!  AND getting to try them out at a discount.  Bonus!
The Gnarley Dawg was just a couple of blocks from our first shopping stop, Mathis Brothers.  The kids were troopers as Dustin and I picked out a new couch for the living room, then added a new mattress set for Cole.  Looks like he'll be moving to a big boy bed later this week!  Pray for us!!
A few other random shopping trips, including a fun trip to Toys R Us for the kiddies, and a night cap at Pei Wei and we were on our way back home.  I love our little shopping trips!  We had lots of fun, got some things marked off the "must do before Wyatt" list and relaxed.  Something we don't do often enough.  Yep.  Bank holidays are awesome!
﻿
Posted by Unknown at 10:04 PM No comments:

I've written before about how one of my saving graces when life gets busy is meal planning.  It is so nice to not have to "think", at least about dinner.  In the past I have meal planned a week at a time with a big grocery shopping trip once a week.  Lately, I've totally and completely fallen off the wagon and that is so hard when I'm not able, or have the energy, to stop by the store at a moment's notice.  It results in lots of standing in the pantry and usually ultimately ends up in pizza or our favorite local Mexican joint.  After noticing that my freezer was actually over flowing with freezer meals and packages of meat I had picked up on sale, all buried under other stuff I had thrown in there on a whim, I knew it was time to do some planning and use it up before it was ruined.

This spurred me to meal plan for two weeks.  I usually DREAD meal planning and often get stuck in an idea rut, but this actually went fast.  It has only taken me about 30 minutes to plan and make out a grocery list this morning.  Not too shabby.  I started by printing out a cute little calendar.  It makes me smile.  I found mine here.  And it's FREE.  Cause I'm cheap like that!  :) 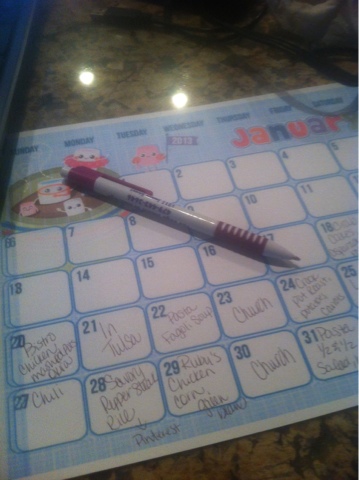 I looked through my freezer and took into consideration meals I had already stashed and meats I had already purchased.  Sigh.  This makes me feel so.  much.  better.  This isn't written in stone.  It will switch around based on whatever trips our trigger and there will still be nights we go love on some queso at the Mexican joint, but overall this helps so much!

Do you meal plan?  What's on your menu?

Posted by Unknown at 8:49 AM No comments:

I know, I know.  All of you out there with a mix of boys and girls in your family will disagree with me.  You all say boys are hands down easier to raise.  That may be so, but in the beginning, I have to say, these boys have been harder.  Harder to name.  Harder to plan for.  Harder to chase.

Boy names just don't have the cute little ring to them of girl names.  Boy nurseries are, well, basically boring.  There just aren't many new, fresh ideas with boys.  It makes these first few months of decision making hard on a momma.  With all of that being said, Dustin and I have recently made two BIG decisions in regards to Baby Brother 2.0.  That's what I've been calling him lately.  Cute, huh??

First is his name.  Going into the ultrasound we really didn't even have a boy name "short list".  I don't know if we couldn't come up with anything or if we were hedging our bets that we would be seeing a hamburger rather than a hot dog on that little black and white screen, but we had nuthin'.  There were several discussions with our families and one name kept coming up from Dustin.


Wyatt
If this were a girl, we had already decided that somewhere in her name would be "Claire" as a nod to my mom, Clarese.  That didn't seem to work for a boy much and after a day or so my sister made a great recommendation.  My mom's maiden name is Kreiger, and she suggested..
Kreig
We both liked it rather quickly and have drug it along with us since Christmas.  Holding on to it for the past couple of weeks, we have started calling him Wyatt and KJ even added Baby Wyatt to her nightly prayers.  We recently decided that we loved it and that it has stuck.  So, this spring we will welcome our little
Wyatt Kreig
After what seems like forever looking over, what I kept thinking, were somewhat girly boy nursery themes, I found one the other night I felt was worthy enough to take to Dustin.  He was immediately in love.  The inspiration came from, of course, a link I found on Pinterest. We love the calm, neutral colors with a few, subtle vintage OSU and sports details.  It isn't obnoxiously orange.  It isn't the same as Cole's sports room, but since they will be connected by the Jack and Jill bath, they will compliment each other perfectly.  And what better way to celebrate a little boy named Wyatt than with a few cowboy details in his room?  You can find more pictures from our inspiration room here.  And follow me on Pinterest here.﻿
Posted by Unknown at 8:17 AM 3 comments:

Confession Number 105: I Don't Do Resolutions

New Year's Resolutions really aren't my thing.  Kind of strange when I think of it, considering I'm such a goal oriented person.  However, this year, I can't help but find myself considering a few new goals for the coming months.  In no particular order...drumroll please!

1- Work on my relationships.  Relationships with my kids, husband, friends, God.  The list goes on and on.  I particularly have let my friendships slide for the most part since going back to work.  When I would whine about it (as I often did) Dustin would remind me that friendship is something you have to work toward.  It doesn't just happen.  Sigh.  So, here I am, recommitting myself to calling or texting friends out of the blue, getting together for playdates and mommy dates and making MOPS a priority.  The relationships I made with women there are invaluable.  This goal also includes more quiet time with God and more meaningful time with my husband and children.  The time I have with them should be special and fun, not momma always spending her time marking things off on her to do list.  How to find all of this time?  Well, I'm still working on that, but at least I'm working on it, right??  The first step is half the battle.  At least that is what I'm telling myself.

2- Be flexible.  With "Baby Charli" on the way, I do believe this goal may be the key to my existence.  This means not getting my tail in a knot when things don't go how I think they should.  Embracing being late to church.  At least we are there.  Hugging on my children even when they don't get a bath every single night.  A little dirt under the nails makes them healthier.  Leaving the house with out make up.  Who am I kidding?  I do this frequently anyway!  Realizing that work is work and leaving it there.  Something I will *struggle* with as testing approaches this spring.  Going with the flow when the schedule changes unexpectedly.  This one sometimes throws me for a loop and can  turn a good mood sour.

3- Pray for clarity.  It seems each year I struggle with realizing God's plan for my life.  This year is no different.  Yesterday in our small group at church, our leader, Lance, asked what our prayer for the year was.  So many went through my head.  A strong marriage.  A healthy Baby Charli.  Health for my family.  One kept standing out among all the others.  Clarity.  For God's plan.  For God's will.  For God to expose Himself to me in a way he never has before.

So, yeah.  I guess I'm doing resolutions this year.  I hate it when I'm wrong.
Posted by Unknown at 7:50 AM No comments: